A liquid-crystal display (LCD) is a flat-panel display or other electronically modulated optical device that uses the light-modulating properties of liquid crystals. Liquid crystals do not emit light directly, instead using a back-light or reflector to produce images in color or monochrome. LCDs are available to display arbitrary images (as in a general-purpose computer display) or fixed images with low information content, which can be displayed or hidden, such as preset words, digits, and 7-segment displays, as in a digital clock. They use the same basic technology, except that arbitrary images are made up of a large number of small pixels, while other displays have larger elements. In this tutorial, we are using 16×2 character LCD display where 16 is characters per line & there are two lines. It means each 16×2 LCD can represent 32 characters, you can represent more characters by scrolling the text. 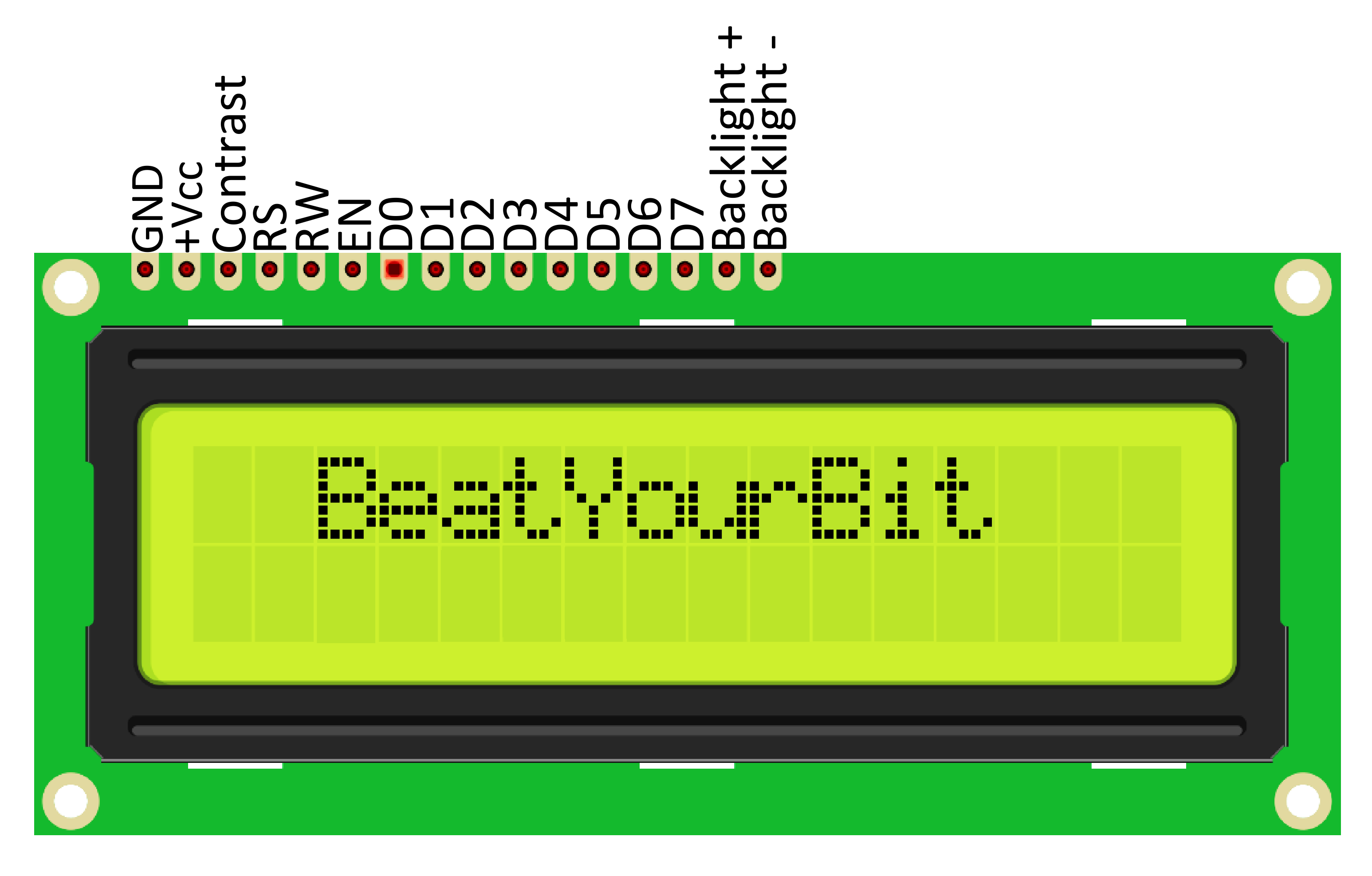 There are two methods to interface 16×2 LCD with Arduino:

In first method, RS, R/W, EN and Data pins will be connected to Arduino; 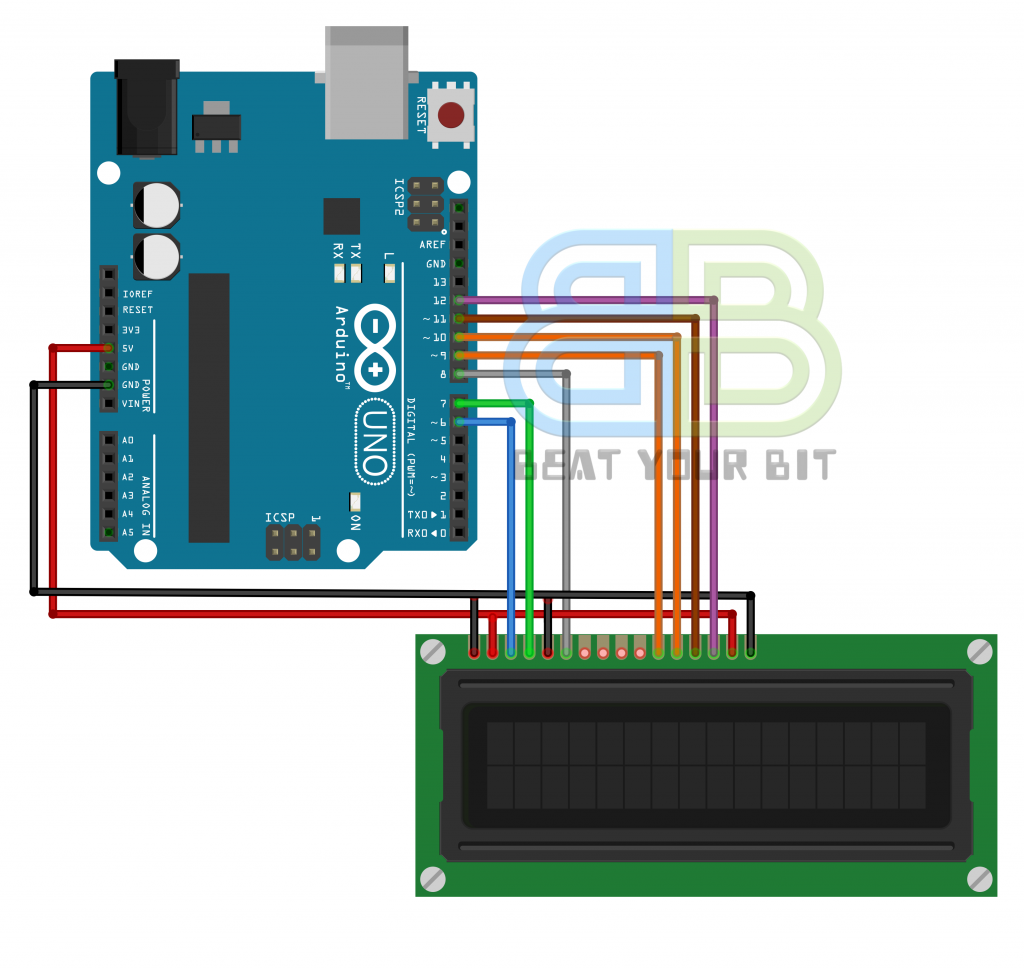 As shown in above image, contrast pin is connected with pin 6 of Arduino hence contrast will be adjusted by value set in code. In the program ‘LiquidCrystal’ library so make sure you have same library installed in your Arduino IDE. (You can install libraries from Sketch>Include library>Manage libraries)

In another method, an I2C module will be connected to LCD. By using I2C module only two pins SDA (Serial Data) & SCL (Serial Clock) will be used from Arduino so less wiring for this. LCD will receive commands from Arduino by I2C protocol 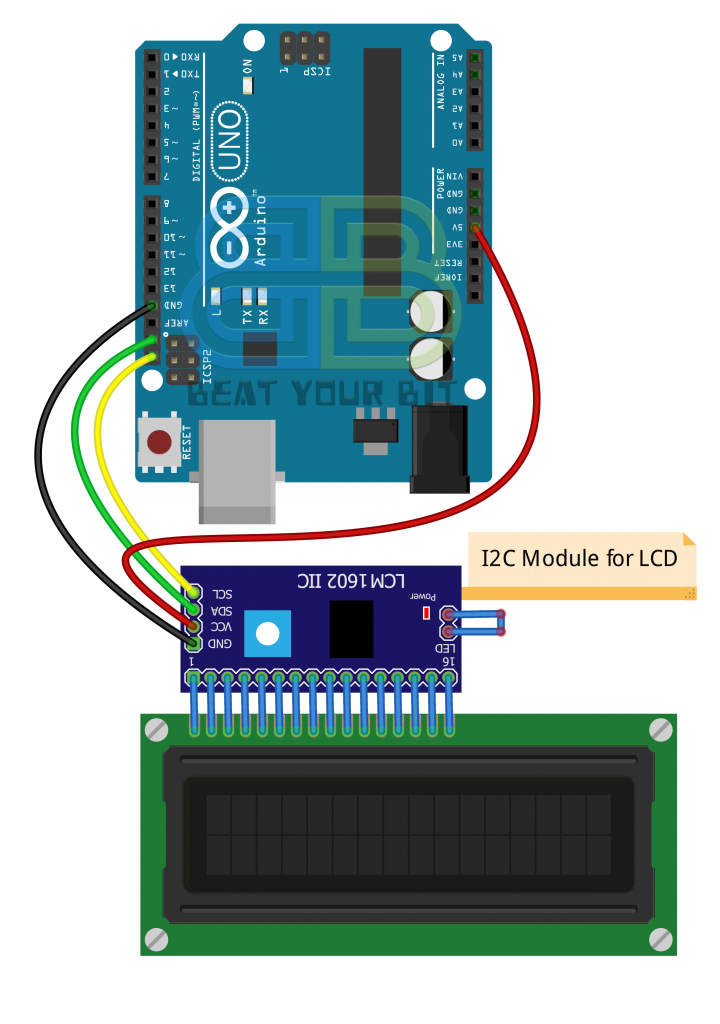 As shown in above image, I2C module is connected to LCD directly (For safer side, solder a female header strip on LCD and connect I2C on that so if somehow I2C module or LCD stops working then it can be easily replaced). You can connect multiple I2C device parallely on same pin. Actually A4 & A5 pins are SDA & SCL so same can be connected on A4 & A5 too(Check Arduino pinout first). There will be a jumper on I2C module which is used to turn on-off LCD backlight. You will find a potentiometer which is actually contrast set for LCD.

I2C module & its interface with LCD looks like this: 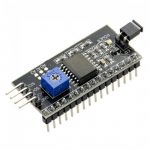 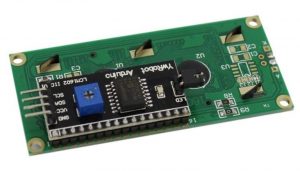 One more difference between both connection type is library. You need different library for I2C which is ‘LiquidCrystal_I2C’ and it is available here.

Before proceeding for I2C code download, you need to confirm I2C address. Each I2C module has an address which we need to mention in second line LiquidCrystal_I2C  lcd(0x3F, 16, 2); Here i’ve mentioned 0x3F because my I2C module has this address. To know your I2C module address you may need to run I2C scanner program in your Arduino and get I2C address on serial monitor like ths; 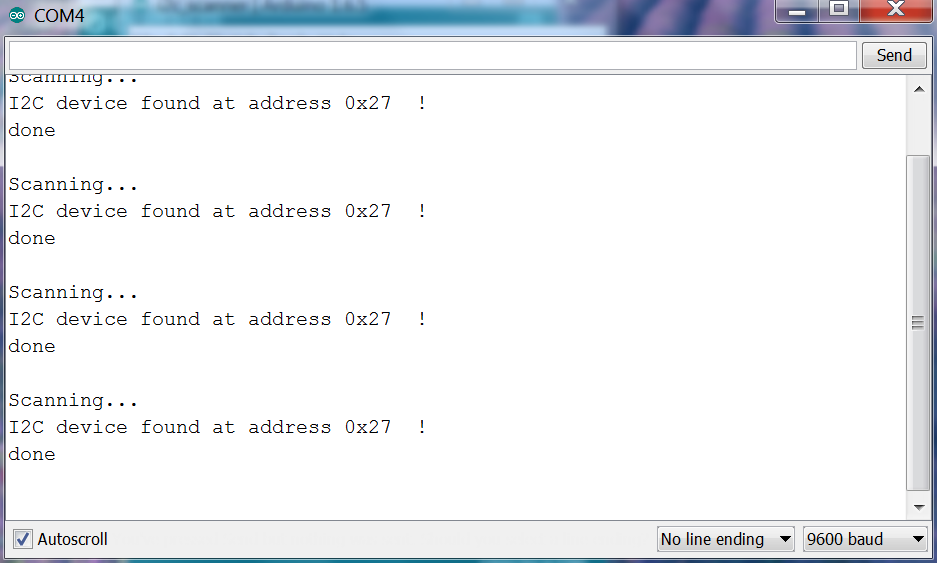 Use this tutorial to know the address of your I2C device. Get I2C address, put in above code & eureka…!!!

After connecting LCD with Arduino you can display sensor & variable values, text messages & also can set values by interfacing keypad with Arduino. Give your feedback about this tutorial in Contact, Your feedback will be appreciated. 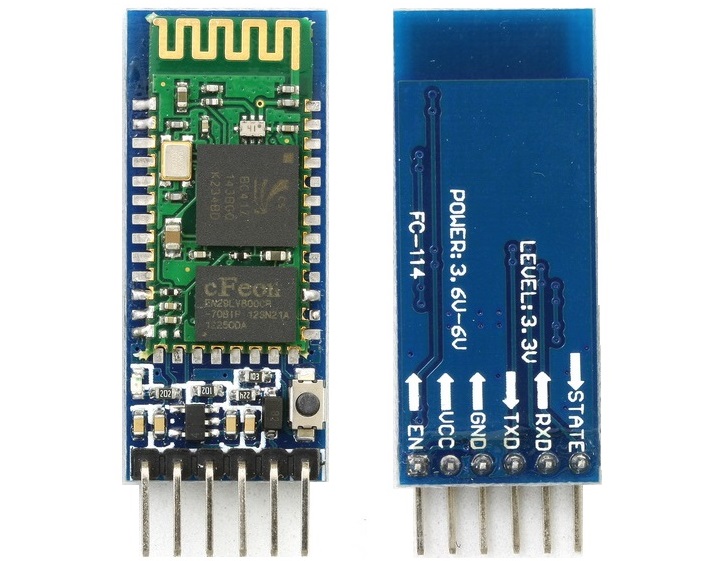 The Bluetooth module HC-05 is a MASTER/SLAVE module. By default the factory setting is SLAVE. The Role of the module (Master or Slave) can be configured only by AT commands. The slave modules cannot initiate a connection to another Bluetooth device, but can accept connections. Master module can initiate a connection to other devices. The user can use it simply for a serial port replacement to establish connection between MCU and GPS, PC to your embedded project, etc. Refer Datasheet/User Manual & AT command’s list.

State: It is status indicator pin. When the HC05 is not connected to or not paired with any other Bluetooth device, signal at this pin goes Low. During this state the on-board LED flashes continuously which indicates that the module is not paired with any device. When HC05 is paired or connected with any Bluetooth device, the pin status goes High. During this state, on-board LED blinks with a constant delay say for example 2 seconds delay which indicates that the module is paired.

Apart from pins, you will find a small push button on HC05. When you press the button for 1 second, HC05 will enable AT command mode. During AT command mode you can change different parameters of HC05, but while changing parameters the HC05 shouldn’t be connected/paired with any device. 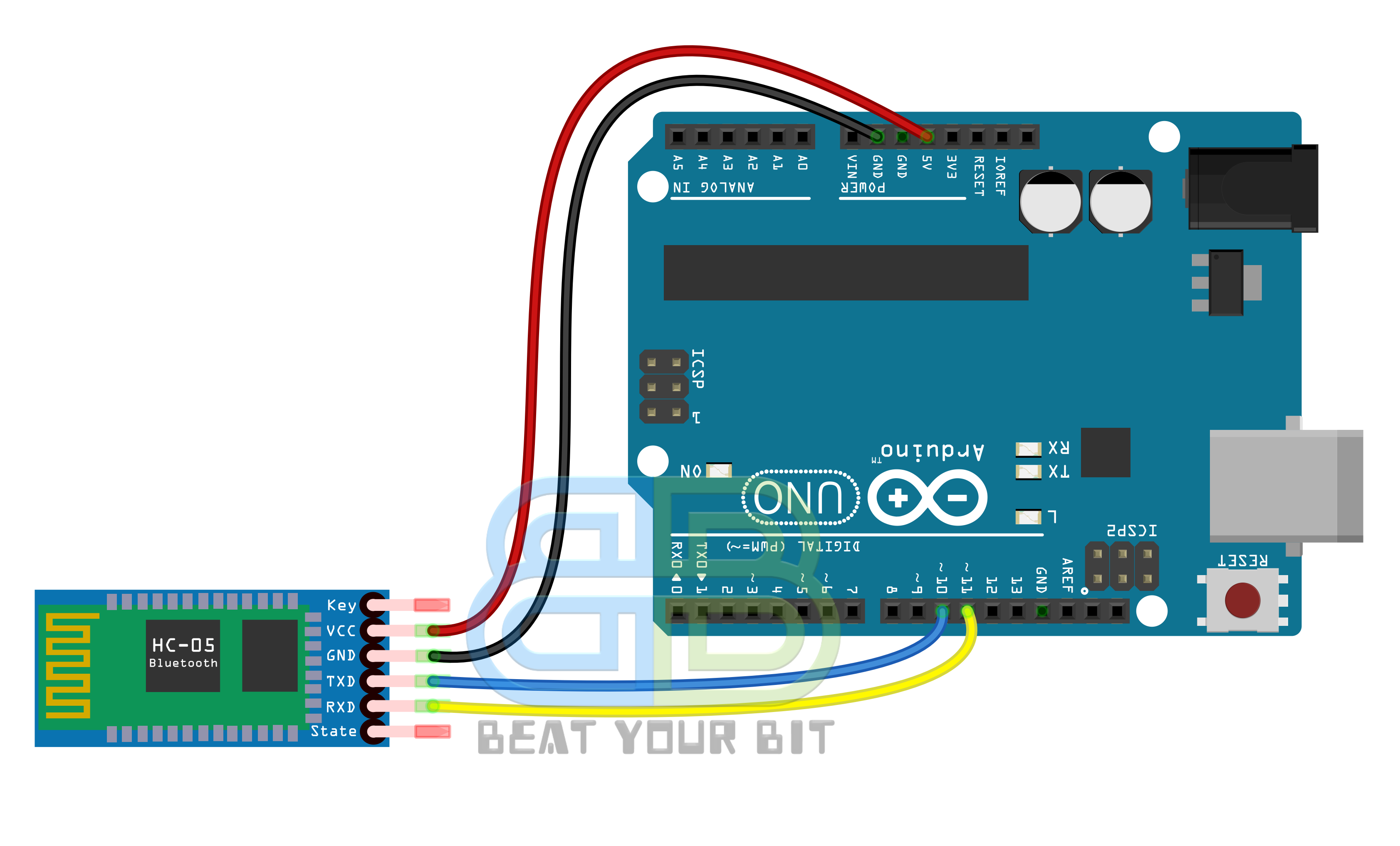 Normally, people connects HC05 TXD & RXD to Arduino RX(D0) & TX(D1), but in that case if you want to upload any code using USB port then you have to remove connection from D0 & D1 otherwise you will get code upload error. To avoid this issue there is one best solution as library called ‘SoftwareSerial’. Using  SoftwareSerial library we can configure any two DIO as Tx & Rx. In above connection diagram, HC05 Tx & Rx are connected to Arduino pins D10 & D11 which to be assigned as Rx & Tx respectively.

HC-05 Arduino Test Code
Arduino
You can download above code from here.

#include : As you can see SoftwareSerial library is included, it is available in Arduino IDE

char data; : variable where incoming data will be stored, for better execution data will be first stored in a variable then will be processed.

Serial.println(“Beat Your Bit”); print custom message on serial monitor to confirm serial communication has been initiated

BTserial.println(“Beat Your Bit”); transmit custom message on HC05 paired device to confirm serial communication with HC05 has been initiated

As explained, this code exchanges data between HC05 and Arduino IDE serial monitor. We can see data received on serial monitor but to read the data received on HC05, we have to use an android app or any terminal application which can be connected with HC05 using Bluetooth. Here we are going to use android app to test Arduino-HC05 connection & data exchange. I used Arduino Bluetooth Control app which have many add on features & easy to use. It has serial terminal, arrow keys, buttons, slider, accelerometer & voice control features.

Connect circuit as shown in connection diagram, upload code and connect/pair HC05 with your smartphone. If you are using/pairing HC05 for first time then default pairing PIN may be 1234, you can change it later using AT commands. Open Arduino Bluetooth Control App & select paired HC05. Open terminal windows in app & serial monitor in Arduino IDE with mentioned baud-rate. Write any text in Arduino IDE serial monitor & press enter, you will receive same text in terminal window of Arduino Bluetooth Control app. Vice versa, write in app and send it to Arduino IDE serial monitor.

You can change HC05 default settings like Bluetooth display name, pairing PIN, baud rate etc. As mentioned in Pin-out details, you have to put HC05 in AT command mode by pressing the push button while power up the module but make sure it is not connected with any other Bluetooth device.

How to put HC05 in AT command mode:

Some useful AT commands:

AT : Simple feedback request. If communication is working fine then it will return “OK”

AT+STATE : This returns the current state of the module.
For Example:
“+STATE:INITIALIZED
OK”

AT+NAME : The command AT+NAME? only works in AT command mode. If HC05 is not responding on AT+NAME? then put HC05 in AT command mode as procedure mentioned in tutorial.
Return when AT+NAME? is given:
“+NAME:HC-05
OK”
(To change name : AT+NAME=BeatYourBit, Returns “OK”)

You can find all AT commands list from here.

I hope you liked this tutorial, now you can add Bluetooth interface in your project & expand the features. Further you can display values on display, data exchange with another wireless modules like RF & WiFi. Give your feedback about this tutorial in Contact, Your feedback will be appreciated. 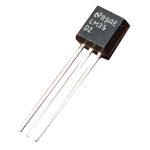 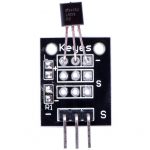 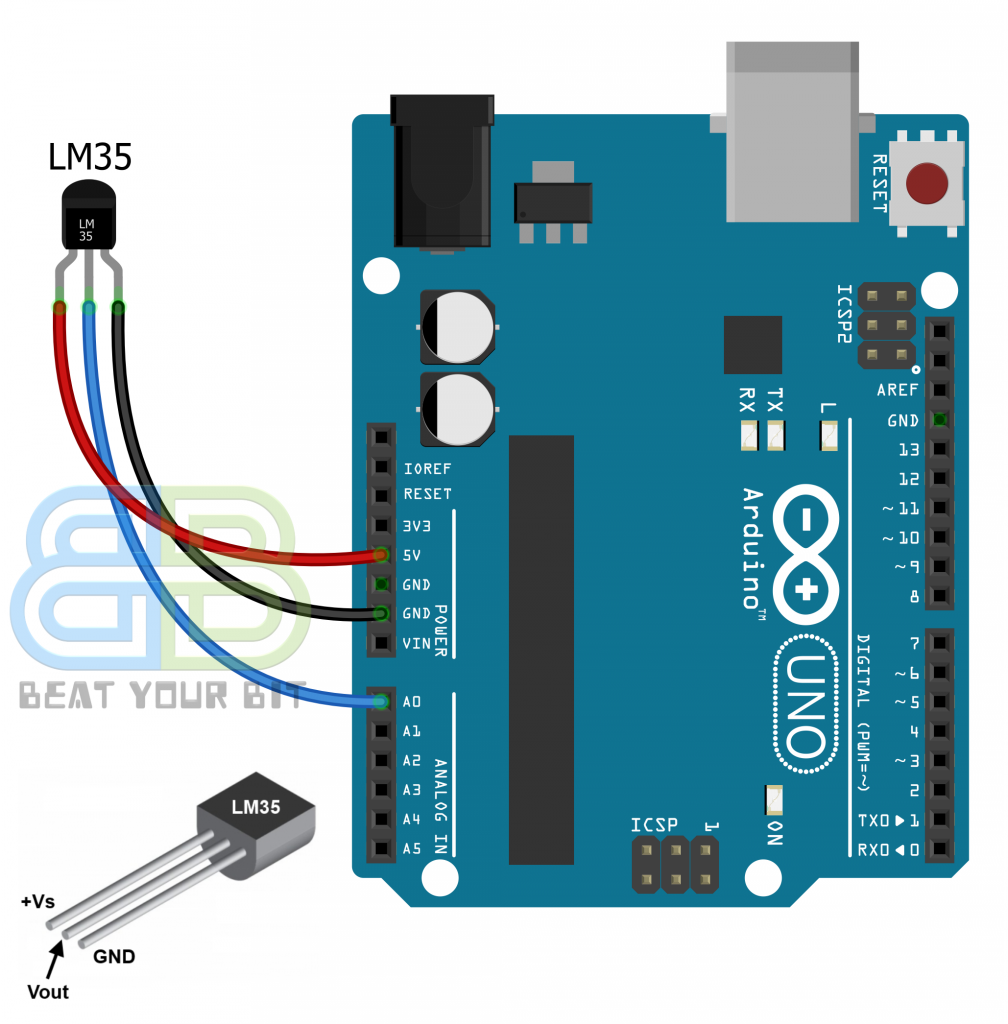 LM35 has 3 pins, +Vs (1) & GND (3) for power supply and OUT (2) which gives analog output. It consumes approximately +5VDC. The output pin provides an analog voltage output that is linearly proportional to the Celsius (centigrade) temperature. Pin 2 gives an output of 1 millivolt per 0.1°C (10 mV per degree), So to get the degree value in Celsius  voltage output to be divide it by 10.

Arduino LM35 Test Code
Arduino
You can download this code from here.

In further expansion to this you can add LCD to display values & relay & make temperature control equipment. I hope this tutorial will be helpful for temperature measurement in your Arduino projects. In future I will upload more tutorials with LCD and such sensor interfaces with Arduino. Give your feedback about this tutorial in Contact, Your feedback will be appreciated.